The Berkeley Connect program opens up the extraordinary resources of the university to you: the extraordinary students on our campus. By joining, you will become part of a community of like-minded faculty, mentors, and students that will provide a supportive environment in which to exchange and discuss ideas and goals. Berkeley Connect will help you to make the most of your time at the university as you learn more about the major in Music. We’re excited to get to know you!

Message from the Director

Practicing and honing musical skills is a solitary, even lonely, activity; performance on the other hand is a rewarding experience that endeavors to connect the performer’s musical passion and expression with other human beings’–either with other musicians in an ensemble, or the audience, or composers. Musical activity is a collective effort, many say its purpose is to communicate, but can it exist without being communicative?  When the pandemic upended our lives, this hardship brought new perspectives and challenged us to better understand the meaning of music-making, and why we do what we do. Developing these kinds of insights—whether from a performer’s, composer’s or an audience/listener’s perspective—will shape our music paths into the future.

At Berkeley Connect, under the guidance of your mentor, you will explore variety of topics in a relaxed environment. Topics will include: How can music express our roots/identity? In what ways? How do you define it? How will the pandemic have positive or negative impacts on our daily music making?  How does pop culture shape our view of musical aesthetics? Pondering and talking about the big questions gives us a deeper understanding of Music, helps us grow individually, and brings us together so we can thrive in supportive community.

I invite you to open your heart and mind to this unique environment, and share your imagination and passion so that we can strengthen our voices and help each other on our Musical journeys.

Berkeley Connect links undergraduate students with experienced mentors in Music. These mentors lead small groups of 10-20 students in regular meetings; they also meet with students one-on-one to provide guidance and advice. The core of the Berkeley Connect program is a one-credit, pass-fail course that is designed to create a community of students with similar intellectual interests. There is no homework associated with Berkeley Connect: no exams, no papers, no quizzes. Instead, small group meetings focus on sharing ideas and learning new skills within the Music major as a way to foster friendships and provide a supportive intellectual community for Berkeley undergraduates.The only requirement for joining Berkeley Connect in Music is that you have an interest in the field of study. You do not have to be a major in order to participate! Undeclared freshmen and sophomores are welcome, along with entering junior transfers and juniors and seniors who have declared the major.

Every semester, Berkeley Connect sponsors a wide range of activities and events for participating students. Â They include:

At the heart of Berkeley Connect is the relationship between you and your mentor. The Berkeley Connect mentors are advanced graduate students or recent PhDs in Music, who are chosen both for their demonstrated commitment to undergraduates and for their scholarly achievement. They are dedicated to providing the kind of close-knit community and one-on-one attention that can be hard to find at a large university.

When you sign up for Berkeley Connect, you will join one of several small groups of participants in Music. Your small group will be led by your mentor, and will meet every other week during the semester for an hour-long dinner discussion sessions. Discussions will focus on key intellectual issues within Music as well as key skills you need to succeed in the major. Above all, the small groups will focus on building connections among students, so that each group becomes a supportive community for all participants.

You will also meet with your mentor one-on-one at least twice during the semester, once to get acquainted, and a second time just before Tele-Bears, to discuss your plans for completing your major. Your mentor also has office hours every other week, during which you are free to show up and ask questions, talk over your day or your week, discuss what you are learning in class, or just have an informal conversation.

Dr. Wei Cheng, Associate Teaching Professor and the Director of the Choral Program at the University of California, Berkeley is an active performer, educator, clinician, and adjudicator in both the United States and China. At UC Berkeley, she conducts Chamber Chorus and University Chorus, teaches conducting, and oversees the vocal program in the Department of Music. Originally from Beijing, China, she completed her Master’s and Doctoral degrees in choral conducting at College-Conservatory of Music, University of Cincinnati. She has studied under world renown master teachers Helmuth Rilling, Dale Warland, Stephen Cleobury, Jon Washburn, Simon Carrington, Richard Westenberg, Fiora Contino and other celebrated conductors.

Before coming to Berkeley 2018, Dr. Cheng was an Associate Professor and the Director of Choral Activities at Denison University, where her choirs frequently toured internationally, and performed with world-class musicians and ensembles such as Bobby McFerrin, Phillippe Entrenmont, Gloriae Dei Cantores, Munich Symphony Orchestra, and Stara Zagora Opera Chorus and Orchestra in Bulgaria. Upon her arrival at UC Berkeley, she prepared Chamber Chorus and Volti for Houston Symphony composer-in-residence Jimmy Lopez’s world premiere of Dreamers; conducted by Essa Pekka Salonen and performed with Philharmonia Orchestra, London.

As an active performer, her main professional activities are centered in China. Dr. Cheng has been a frequent guest conductor with the Young People’s Chamber Choir at the National Center for Performing Arts, Beijing, China National Opera Chorus, Harmonia, and Beijing International Children’s Choir. Her recent engagements include residencies at Lanzhou Performing Arts Group and the Central Conservatory of Music, preparing choruses for Mahler’s Symphonies.

As a clinician and conductor, Dr. Cheng has worked with all age groups ranging from children’s choir to professional choirs both in the United States and China, as well as guest teaching at major music conservatories in China. Her professional interests are mainly focused on conducting pedagogy. In March, she presented virtually on movement and expression at the American Choral Director Association’s national conference. Her presentation was entitled Conducting/Non-Conducting: Expressiveness Reinterpreted. 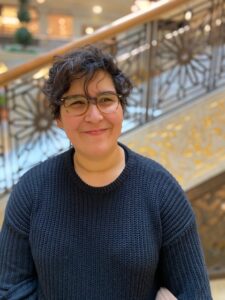 Nour El Rayes is a PhD candidate in Music.

Where did you grow up?

Where did you go to college and what was your major?

Sarah Lawrence College. We didn’t have to declare majors but I concentrated in pre-med, music, and history.

How would you describe your research in a sentence or two?

I work on alternative music in Lebanon, a country that is often discussed as being enmeshed in an endless cycle of violence. My project is about how alternative music (the sound itself, the people who make it, the audiences, its politics) creates spaces in which non-violent futures for Lebanon can be imagined and enacted.

During a semester in Berkeley Connect in Music, you will participate in one-on-one conversations with your mentor, small-group discussions, special events and field trips.

Berkeley Connect discussion sessions are informal and interactive, with time allowed for students to check in, talk about their experiences on campus, and reflect on current events that create the context for their academic studies.

Please see our FAQs.  If you have additional questions about Berkeley Connect in Music, please contact:  Wei Cheng, Faculty Director, at weicheng1@berkeley.edu.

You can also contact the central Berkeley Connect office  at berkeleyconnect@berkeley.eduor (510)664-4182.